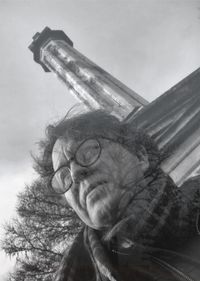 They're out there performing miracles. Musicians with what are called "handicaps." My friend and occasional composing partner David Hoffman played for Ray Charles for 13 years and EVERYONE knows about this ICON (Ironically David himself lost his eyesight two years ago.). Most of us have heard about the genius of guitarist Django Reinhart's abilities with a very damaged fretting hand. Few others may know a bit less of Jerry Garcia's missing digit. But right now I'm going to focus on what I know and how I apply my style of playing on my albums (Not all my albums are finger style guitar though.).

I have been building stringed instruments for about 25 years, as well as playing Guitar, and other more exotic instruments in my recordings. Early in my career, I lost a few fingers in an accident. A life changing event is a funny thing. For me it was instantaneous. I knew in a "nanosecond" that my life was altered forever.     "IT CAN'T HAPPEN HERE!" (Frank Zappa)

I was lucky compared to many who experience life changing events One can only be amazed at what some of our soldiers returning from Iraq and Afghanistan are going through.. My event would have to be considered tiny by comparison. Yet, at the time it was difficult for me. Loss, fear, and grief are all relative things.

In my loss, I also found direction. My musical path could not exactly follow the straight coarse. I could not reach certain"voicing's". With only one good finger, I could not repeat "pull off's". Certain, melodic directions I loved and heard others play, would have to be painted differently. I did not have the ability to repeat what he or she did. I didn't have the physical capacity to do so. And of coarse, relative to certain musicians, I did not posses the talent of Django Reinhart who's fretting hand was severely burned in a fire. 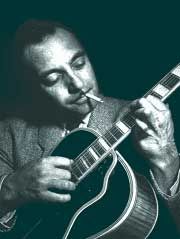 There are others who have played wonderfully with injuries; Les Paul suffered a severe injury to his arm in an automobile accident. The Banjo Player  Barry Abernathy is amazing with almost no fingers. He was amazing! When my first album (Various Waves) came out in 1989,  MUSICAL STARSTREAMS, the largest syndicated instrumental radio show in America called to tell me he was placing the album in the TOP FIVE of the year. Among flattering things he had to say was that he was glad I didn't use the particular type of phrasing popular at that time. I actually tried to play that style on the tune, but I couldn't cut it. I had to make up a linear passage that worked within the limitations of my damaged hand. So, you can see, my "limitation" helped define my uniqueness. 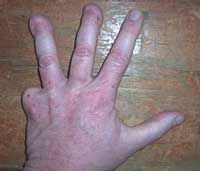 Here is a photo of my injured left hand. Pinky missing. Index is fine thanks to Dr Stackable and Dr Crass.

My limitation has allowed me to approach sound design in a unique fashion. This fashion is shaped by the tools I have. In all aspects, my limitations have allowed me to paint pictures that are - well, MY pictures. This begs the question: When do you accept, and when do you push beyond? Perhaps this is similar to what Buddhists call The Middle Path; One that is taken a step at a time. A dash of instinct, a spoon of whim, a cup of inspiration, an ounce of self acceptance, with two ounces of the insane belief in yourself.  You need to go past that place you thought was the end of the trail (While you accept the boundaries of your limitation.). Perhaps I am preparing a soup of contradiction, but as I now think about it, I guess that's exactly what life is.

THE SPECIFIC PHYSICALITY OF LIMITATION

Some of us have limitations we do not recognize. Some of us recognize limitations that are not there. Each one has to evaluate where he or she is, based on the entirety of life's experiences. Concerning MY physical limitation... I have a good index finger and thumb (See photo above). The middle and ring finger have no bone in the ends. The flesh was fashioned from a graft on my leg.

When the middle and ring finger "press" on the fingerboard of an instrument, they flatten out (No bone in the ends.). Consequently they are gonna hit more than one string at a time. The challenge is to avoid muting strings I don't intend to mute, and using one finger to press two strings at a time. This maybe something some folks playing an open A chord on a guitar they could do. See photo 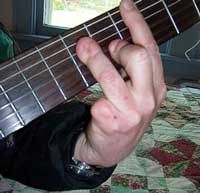 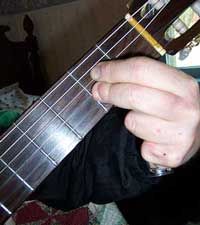 It is tempting to replicate another's ideas. There are so many great musicians out there with great chops. But some chops, because of altered tunings (For example: Open "D" tuning.), I use, and my injury are pretty tough to accomplish. So, you are forced to create your own melodic or chordal statement based on your limitations. From a linear fashion, this can lead to melodic statements that are "unique". As I said earlier, this was a good thing for me! You choose your direction based on what you CAN do, rather than copying what another has done. From a chordal standpoint, the alternate tunings help a bit with certain chord formations (Remember the example of using ONE of my fingers to press two strings.). But, without the extra "digits" adding a 6th, 7th, or 9th to a three note chord can be tough. OR if you CAN do it in the first position on the neck, you cannot do it in the second neck position, etc.

This points out voicing limitations. So, you have a completely different choice criteria. You cannot replicate that famous 8 bar Stevie Ray Vaughn blues line, but you can start on it, and then follow your limitation to discover your own unique voice of expression. Remember, in music there can be many methods for choosing WHAT to do next. Everyone remembers the famous George Martin story about cutting the recording tape in pieces, scattering it on the ground, and then randomly taping it back together to create the wonderful musical collage on the Stg Peppers Album in 1967. There are no rules ....mostly 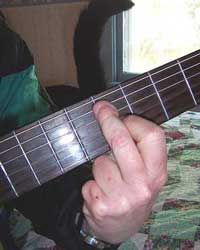 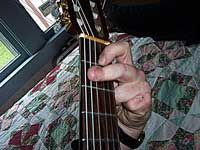 The above two photos show how I utilize "basic" approaches using an "Open" guitar tuning. This CAN be a simple way to play. Strum the guitar open and you have a D chord. Strum the 2nd fret you have E. Strum the 3rd fret, and you have an F chord etc etc. Of coarse there are many other chord voicing's available in "Open Tunings" but this gives you a simple idea. Take a peek at any Richie Havens performance to see how this simplistic approach can be utilized very creatively and soulfully. You may click At Prairies Edge to hear me play a tune in Open D from my album A View From The Plain.

There are many altered tunings, or open tuning schemes available as used by the great blues masters of the past, as well as folkies of the past and present. I immediately think of early Joni Mitchell recordings, as well as a big influence of mine named John Fahey. Many many others utilize it as well, Steffan Grossman, Peter Lang, William Ackerman, Alex DeGrassi, Richie Havens,and Leo Kottke come to mind (Please see a link to a very well done explanation of Richies unique style at the bottom of this page.).

With this new approach it becomes evident that the right hand (Or the finger picking hand if you are right handed.), takes over a large role with syncopation. For example, having the thumb play the bass lines, as the index, middle, and ring fingers pluck out the melody. The above musicians are good examples of this. BUT, some have taken this much further. Stanly Jordon comes to mind as well as probably the best guitarist I've ever seen in person - Martin Taylor. Martin is a Scotsman, and pure genius. He bought a guitar from another guitar builder here in my town named Bill Barker (See YT Video) When off tour, he visited Bill and gave us a concert. He had so many things going on at once it made my head spin. Simply put, his fretting hand plays melody and the right hand plays bass. If any of you have seen a Chapman Stick player (Tony Levin, Trey Gunn ), you can immediately visualize this marvelous technique.

THE BEST WAY IS - EVENTUALLY - YOUR WAY

It sounds like I'm getting off subject but this brings another aspect of the power of limitation. There are certain folks like Martin Taylor, Pat Metheny and others that are such geniuses that it would tempt one to just put the instrument away. Not many folks are going to be able to play on this level. BUT, that is THEIR level of skill, and THEIR path. Each of us needs to find something valid to say in OUR way. It's as easy as placing your ego in a position of perspective. Not easy. But, it's a gift, regardless of the level. To not appreciate it is an unkindness isn't it?

BB King can say in 5 notes, what another may need 25 to say. We need to tame the ego and "be what we is". I laughingly call this Popeye Consciousness. "I yam what i Yam, and that's all that I yam." Do the best you that you can do. And look farther than speed and virtuosity. Look three dimensionaly at the world. What lies underneath? Why did painters at the turn of the 19th century become bored replicating reality? And today, why have many photographers become bored reproducing reality with a tool designed to do just that? What is art? And what is the heart? Read, think, imagine, wonder, create.....feel.

Don't be afraid to travel your own path and "say it your way". Copying is natural. We learn from the greats that have come before us. BUT, to try to keep from being a clone of what is being painted around you is the "big dog difference". Not many people follow their own musical path and not many people think for themselves. Listen to the radio or look at the cover of People Magazine or the Front Page of AOL. I'm yawning already. Use the tools you have been given. Check your perspective and assure yourself you aren't standing in front of yourself. Figure out ways around obstacles (Perhaps one of the major reasons we are here on this planet.). Read and listen to the masters. Shelly, Keats, Beethoven, Copeland. AND investigate simplicity. Something simple can be valid, deep, and as strong as iron. Look at a Beatles tune. Look at a Fender Guitar. Play with the imagination of a child who has never known the crack of the whip telling them "You can't do that!"

My main site showing my albums, Instruments, poetry and photography

A sideline band called  THE NEURONS. Here is a tune from the album Spanish Horizon

Martin Taylor  as I said, one of the finest musicians around

Article on warming up on ABOUT.COM

Musicians and Injuries Great links to other sources